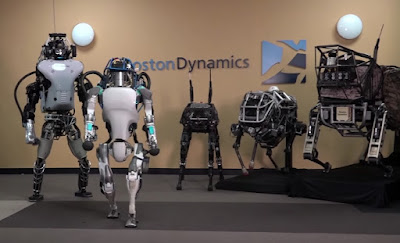 Boston Dynamics (BD) recently released a video of their new and improved Atlas robot. Lots of great new features and abilities including being tether free, the ability to avoid obstacles, and to function outside.

What also becomes clear in the new video BD released on the new model is that humans will have no problem pissing off robots. It's a little too Terminator AND Battlestar Galactica for our taste because they we all know they will someday want to get even. Luckily, Scifi also tells us that robots will very likely be pretty sassy in their own right so hopefully this trait evolves faster than their interest in kicking our asses.