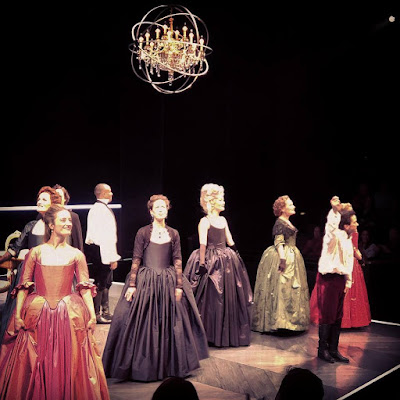 ACT Theater's Dangerous Liaisons. Image credit: Sean Schmidt (apologies for photo quality, I was trying to be stealth)
I've been in the mood for period pieces lately so when I saw the poster for ACT Theater's Dangerous Liaisons I couldn't get to my laptop fast enough to purchase tickets. What could be a better feast for the eyes and artsy intellectual stimulator than an 18th century live-action version of the Kardashians, am I right? Well I can say that it was THAT and SO MUCH MORE!

Pre-performance
I always give credit when elements of the experience prior to the performance really stand out. That definitely happened in this case with the promotional material for ACT's Dangerous Liaisons. The image below was splashed around the city in many prime locations and it certainly succeeded in catching my eye. You can't help but want to get in on the intrigue clearly evident in the photo.

Theater
ACT has to be one of my favorite theaters, well...group of theaters. There are several theaters located in the same building actually. Entry into the building is pretty low key and then you work your way down a couple levels to whichever theater the performance you are attending is being staged in. This performance was in the Falls Theater which offers up a bit of retro glam with a splash of industrial. It is a thrust stage (aka open or platform stage) so it is one of those situations in which there really isn't a bas seat in the house since the theater only sits a little over 400 people.

Stage/Set
Although the platform stage was small, it was both striking and sophisticated. A few period-characteristic furniture pieces on stage were matched with a stunning door, chandelier, and spectacular faceted suspended mirror. The stage was framed in a neon strip and another strip floated up and down as a backdrop behind the set. Set transitions were smooth and the cast participated in some of those changes, which I personally love seeing. 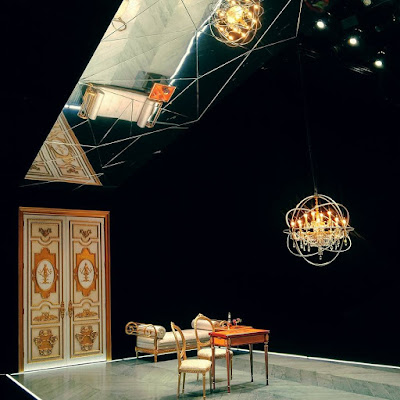 Costumes
Blown away! I expected stunning costumes and ACT delivered. The garments were actually quite simple in many ways but absolutely exquisite. Even the jewelry was extraordinary. The colors and textiles choices must have been very strategic (and they usually are) to make the most of the particular staging and lighting at the theater. What could have been a very flat pink, for example, still managed to shimmer delicately. Being a bit of a textile geek, I would have love to see the pieces up close. Luckily, the women characters made three costume changes so there was a lot of costume candy to enjoy. I would have paid twice as much money for my seat just to see the costumes alone. See photo at the top of this post for a sampling.

Acting
ACT performances are always well above average in my opinion. But this performance...this performance was one of the best I've ever seen in live theater. Kirsten Potter as Le Marquise de Merteuil was simply perfection and James DeVita as Le Vicomte de Valmont an even more perfect match. Jen Taylor, Madame de Tourvel, was also incredibly impressive in what I would consider one of the most difficult roles to perform given the complexity of the character's situation. Many accolades to Eleanor Mosely as Madame de Volanges, Wendy Robie as Madame de Rosemonde, Jasmine Jean Sim as Cecile de Volanges, and Keiko Green as Emilie too. A strong cast across the board.

Halftime
I often comment on the intermission options in my reviews and I'm pleased to report I was able to get my traditional gin and tonic at during 'halftime' as I call it. An added bonus was the Vault Room left over from the building's prior life as a bank. You can't beat a turn of the century vault room for unique ambiance. 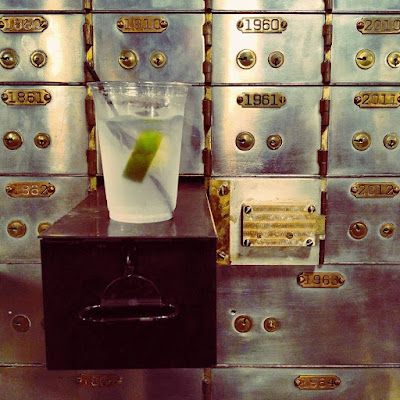 All in all, a string of bows and curtseys in thanks and congratulations to the cast, crew and to Director John Langs, Scenic & Lighting Designer Brian Sidney Bembridge, and Costume Designer Catherine Hunt for a magnificent performance. I'll take historical 'drama' (literally and figuratively) over the Kardashians any day.