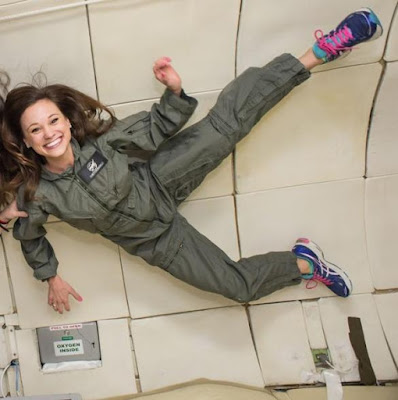 Image credit: NASA/Bill Stafford
Emily Calandrelli (aka "The Space Gal") is an American aeronautics engineer, television host, and advocate for STEM subjects (science, technology, engineering, and math). She is the host and producer of FOX's Xploration Outer Space and a correspondent on Bill Nye Saves the World in addition to working for Discovery News and TechCrunch.

Calandrelli received Bachelor of Science degrees in Aerospace Engineering and Mechanical Engineering from West Virgina University (WVU). During her undergraduate years, she took time off to work in the Disney College Program at Walt Disney World which sparked an interest in themepark ride design. She also took participated in two NASA internship programs while she was an undergraduate. In her 4th year at WVU, Calendrelli received the Truman Scholarshiop and in her 5th year, the Barry M. Goldwater Scholarship. Calandrelli then went on to the Massachusetts Institute of Technology to earn a Masters in Aeronautics and Astronautics and a Masters in Technology and Policy where she received the Rene H. Miller Prize for her work systems engineering work.

Calandrelli was named our Queen of the Smart Set for 2017.