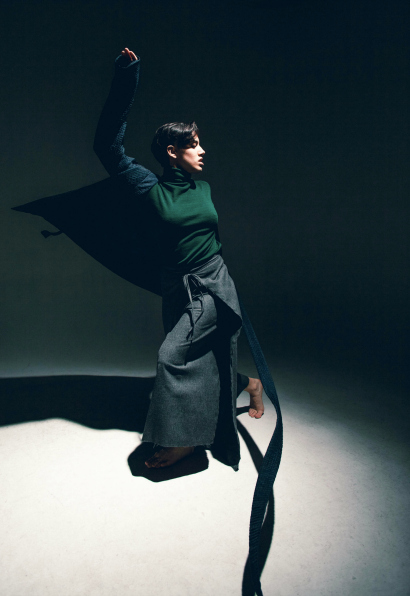 Ramgotra's work ranges from the exploration of her mixed race identity to addressing the challenges of diversity in the environmental movement, and the creative expression of complex environmental and social issues. Her goal as an artist is to create works that foster a new culture of inclusion, respect and innovation through cross-disciplinary partnerships: eliminating the abstraction that makes art inaccessible, and bringing the deeper meaning to the eyes and ears of her audience.

Inspiration for her work comes from her mixed-race experience, her research in the environmental field, and her strong desire to tell challenging truths about our culture. Ramgotra deeply values collaboration with other performers and artists in the area, and believes that making connections across disciplines will help bring art to the forefront of positive cultural change.

Ramgotra began her dance training with classical Indian styles such as Kathak and Bharatanatyam, and later explored Western dance traditions including jazz, modern, contemporary and ballet at the school of Spectrum Dance Theater in Seattle for many years. Most recently, she has been studying and participating in more urban and street styles such as popping, vogue and house alongside local artists such as Angel Moonyeka and Amy O'Neal.

Jasmmine's unique movement style is a fusion of all the forms she has learned up until this point, and she embodies them beginning and ending with a respect for the culture and roots of each form - she believes strongly that we need to acknowledge the history of each dance style, and continue to learn the legacies we are embodying when we practice them.

Ramgotra will graduate with a double degree in Environmental Studies and Dance, and a minor in Environmental Science from the University of Washington in June of 2017. Afterwards, she is looking forward to embarking on new meaningful collaborations that bring social issues, activism, art, and education to the forefront of cultural expression.

Examples of Ramgotra's creative works can be found below.


"The Disposable Life", performed at the University of Washington Dance Majors Concert in March of 2016: