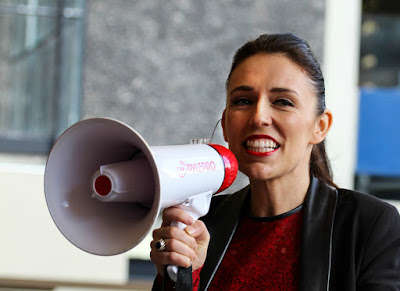 Jacinda Ardern at the University of Auckland, September 2017. Image credit: Ulysse Bellier
Strike a Position | New and Noteworthy in the world of Politics
by Sean Schmidt

Here at Future-ish, we have long been advocates for scientists, designers, and cultural leaders getting engaged with politics and event better, running for public offices. This desire even inspired us to start our Public Intellectual Service & Advocacy (PISA) List in 2007. So we were thrilled to follow the path of Jacinda Ardern throughout 2017.

In October 2017, Ardern became the Prime Minister of New Zealand. At age 37, she is now the youngest female head of government in the world. There are many impressive milestones in Arden's career path to New Zealand's Prime Minister but one item on her resume jumped out to us right away, Ardern was/is a DJ, an amateur DJ mind you, but still a DJ (more on Ardern's DJ credentials here.

I'm certainly not the first to note that modern DJ's serve an increasingly important role on society and thus their position in our society continues to be elevated. Obviously, as artists they can choose, mix, and create audio and visual experiences that truly inspire. In addition, they have become historians, philosophers, influencers, and advocates for some of the most pressing social and environmental challenges facing our world. Take DJ Spooky for example.

So the very fact that someone with "DJ" on their resume has risen to the level of world leader has us jumping for joy...to a really great beat obviously.

Ardern's election adds to what seems to be a growing trend: nations electing young, progressive leaders. Clearly youth alone is not the qualification, North Korea disproved that theory several years ago (though that situation was not an open election). Canada's Justin Trudeau and France's Emmanuel Macron were the other recent young leaders elected to heads of government. All were quite early in their political careers when elected and all are still quite early in their terms so how they perfor in these roles is remains to be seen.

There is certainly no expectation that these young world leaders will make everyone happy, no politician ever can. But early signs seem to indicate the 'more' people are 'happer' than they have been in recent years. The reference to the United States' John F. Kennedy (JFK) presidency is often made whenever another young leader enters the political arena and that reference has been made to all three of the young leaders mentioned above. Though JFK was not perfect by any means, his passion and vision for an inclusive future did inspire supporters and opponents alike. Hopefully these new young leaders will do the same.

In Ardern's case, she already has succeeded in addressing complex challenges and bringing adversaries together. One thing we do know about DJs is that they know how to get a room full of very diverse people active and inspired. And yes, they also tend to keep everyone happy.

And cheers to more individuals with science, design, and/or culture credentials being elected to office!