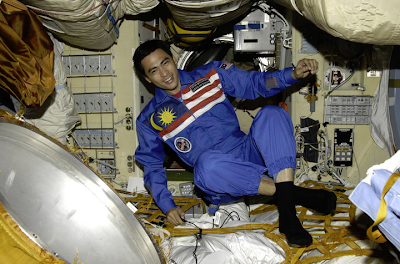 When Sheikh Muszaphar Shukor became the first Malaysian in Space in 2007, he explored new frontiers on two fronts...he took part in innovative scientific research and he tested out new guidelines for practicing his Islamic faith while in orbit. It just so happened that Sheikh Muszaphar's particular mission to the International Space Station (ISS) overlapped the last part of the 2007 observance of Ramadan, a month of fasting for practicing Muslims. This sparked the Malaysian National Space Agency and Malaysian National Fatwa Council to develop and publish an 18 page guidebook to assist Muslims in space in maintaining religious obligations while focusing on their mission. The Guidelines for Performing Islamic Rites at the International Space Station addresses everything from locating Mecca and praying in low-gravity to establishing prayer times and issues of fasting. Sheikh Muszaphar marked the end of Ramadan with the first Eid ul-Fitr party in space. To celebrate he brought along satay and cookies to share with his fellow space travelers, Russian cosmonaut Yuri Malenchenko and U.S. astronaut Peggy Whitson.