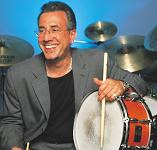 Bobby Sanabria is a drummer, percussionist, composer, arranger, recording artist, producer, educator, and multiple Grammy nominee. Sanabria was born and raised in the Fort Apache section of New York City's South Bronx, his parents were from Puerto Rico. He is considered a master of Afro-Cuban, Brazilian and jazz music both in his performance and his academic work. Sanabria has done extensive Grammy-nominated work in film, television, and radio including an appearance on the Bill Cosby Show. He has both written and been the subject of numerous articles on music. Sanabria has inspired many young jazz artists, particularly Latino jazz musicians, and is credited with repopularizing big band music by infusion it with modern and diverse instruments, rhythms, and sensitivities.

Future-ish added Bobby Sanabria to our PISA List in 2009.