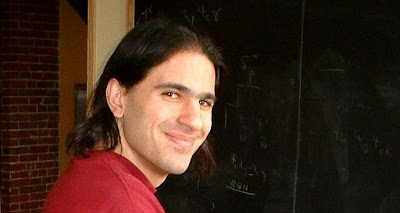 Talk about a multi-dimensional peronality...Nima Arkani-Hamed is an acclaimed theoretical physicist who is researching multiple dimensions and multiple universes. The son of two Iranian physicists, Arkani-Hamed was born in Houston, Texas in 1972. Growing up, Arkani-Hamed's family lived in Iran briefly after the 1979 revolution and then moved to Toronto where he graduated with honors from the University of Toronto with degrees in Mathematics and Physics. Arkani-Hamed completed his PhD at Berkeley in 1997. He worked at Berkeley briefly and then taught physics at Harvard 2002 through 2008. Arkani-Hamed is now on the faculty of Institute for Advanced Study and continues to research weakness of gravaity, string theory, and miltidimensions. His awards include the Gribov Medal of the European Physical Society in 2003, the 'Phi Beta Kappa' award for teaching excellence at Harvard in 2005, and the Raymond & Beverly Sackler Prize from Tel Aviv University in 2008. Arkani-Hamed is a frequent science and physics commentator for television and other media.
Email ThisBlogThis!Share to TwitterShare to FacebookShare to Pinterest
Labels: Nima Arkani-Hamed, Physics, Scelebs
Newer Post Older Post Home