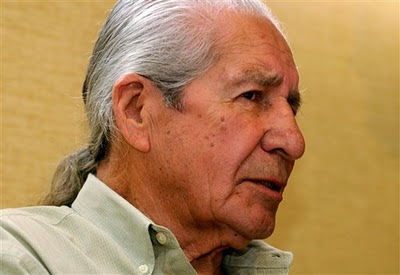 Oren Lyons is a Native American Faithkeeper of the Turtle Clan of the Onondaga and Seneca Nations of the Haudenosaunee (Iroquois Confederacy), as well as a member of the Council of Chiefs of the Haudenosaunee, professor, author, publisher, advocate of Indigenous and environmental causes, and honorary chairman of the Iroquois Nationals Lacrosse team.

Lyons was given the name Joagquisho, Bright Sun with a Strong Wind, at birth and grew up on the Seneca and Onondoga reservations where he was raised in the Iroquois traditional ways of thinking, being, and knowing. In 8th grade, he dropped out of school and later became a talented amateur boxer. In 1950, at age 20 he was drafted into the US Army where he continued to excel in boxing. He returned to the reservation in 1953 where he was recruited by the coach of the Syracuse University lacrosse team. Lyons once again proved an outstanding athlete and was named an All-American lacrosse goalie while at Syracuse and his post-college lacrosse activities helped get him elected to the National Lacrosse Hall of Fame in the US and Canada. He was named 'Man of the Year in Lacrosse' by the NCAA in 1989. Lyons maintains his close connections to lacrosse and continues to be an inspiring role model to both Native and non-Native lacrosse athletes. Lyons graduated from Syracuse in 1958 with a degree in Fine Arts and then lived and worked as a commercial artist in New York City.

In 1970, Lyons returned to the Onondoga Nation during which time he accepted the role of Faithkeeper of the Turtle Clan of the Onondaga and Seneca Nations of the Haudenosaunee (Iroquois Confederacy) and began his advocacy work on Indigenous and environmental issues. In addition to his duties as Faithkeeper, Lyons is a professor at SUNY - Buffalo where he directs the Native American Studies program within the department of American Studies. Lyons also co-founded Daybreak, a national Indian newspaper, with John Mohawk, a Seneca teacher and journalist. Lyons actively participates in many national and international forums including the Human Rights Commission of the United Nations. Lyons has received many awards and honors, including an honorary law degree from Syracuse University, the Ellis Island Congressional Medal of Honor, the National Audubon Society's Audubon Medal for service to the cause of conservation, and the first International Earth Day Award from the United Nations. In 1992, Lyons became the first Indigenous individual to address the U.N. General Assembly. Lyons serves on the board of the Harvard Project on American Indian Economic Development and has been a Native American representative to the Corporation for Public Broadcasting since 1974.

Future-ish added Oren Lyons to our PISA List in 2010.