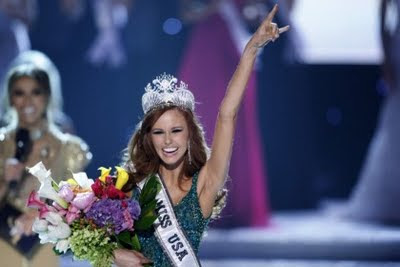 We've highlighted many fabulous 'glamour geeks' here on Future-ish so we are pleased to offer a string of bows and curtsies in congratulations to our first 'regal geek'. That's right, in June 2011 Alyssa Campanella, an actress, fashion model, and self-proclaimed history and science geek, was crowned Miss USA in Las Vegas. The reigning Ms. California, Campanella brings with her to the role a passion for space exploration, the arts (particularly fashion and Italian cooking), and history books.

As royalty goes, most crowns come with a string of new titles so we've come up with a couple for this smart sovereign.

Miss Next Century
We launched our Citizens of the Next Century List in 2010 and have had a fantastic time researching new inductees for our 2011 list that will be announced in December. Honorees on the list are individuals that we feel are way ahead of their time. They are people that are passionate about the science, design, and culture shaping our future and - more importantly - they are actively creating a better future...today! Just for fun, we're going to jump the gun a little and name Campanella our first ever Miss Next Century as she is a shining example of the type of individuals the honor was established to recognize. In one interview, Campanella even states that Charles Bolden, Jr., Chief Administrator of NASA, is the person she'd most like to have lunch with saying that she'd "love to discuss his opinions and thoughts about certain past missions within the NASA space program, as well as what the future holds in store for discovery." That's SO next century!

Queen of The Smart Set
Given Campanella's interests (and for a little more fun), we've also named Campanella our very first Queen of The Smart Set. We often use the term, "the smart set", to refer to our collection of people with a passion for science, design, and culture shaping our future (you can find more of our Smart Set on the sidebar to the left). Campanella has definitely earned the title. Campanella took her studies seriously early on, maintaining a 4.0 GPA through high school and was a consistent member on the honor roll. She even graduated from high school a year early after receiving a scholarship to the New York Conservatory for Dramatic Arts in Manhattan. Along the way, she received national merit awards from the United States Achievement Academy in 2004 and 2006. And, like many other royals around the world who support humanitarian causes, volunteering is also very important to Alyssa. She has volunteered with organizations including UNICEF, Ronald McDonald House, and Go Red for Women. In 2005, she organized a fundraiser within her community for UNICEF and raised over $2200 for the victims of Hurricane Katrina. In 2007, she was named an Honorary UNICEF Ambassador.

Below is another image of Campanella we love. It is by David Colwell for a fashion spread in the March 2011 issue of Baltimore Magazine titled Wonderland. Notice the aircraft blueprints in the background...a perfect setting indeed for this newly-crowned thoroughly modern monarch. 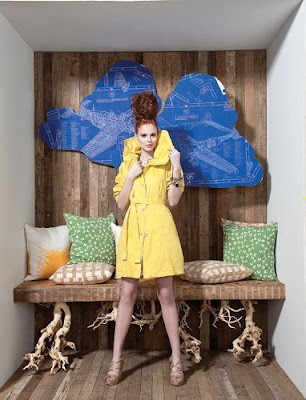