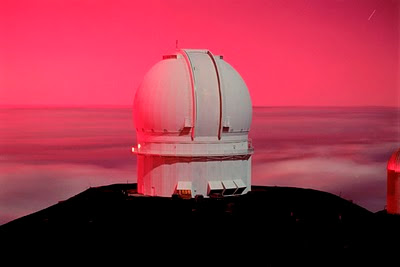 Image credit: Richard Wainscoat. Prints available from artist.
Here at Future-ish, we love astronomy and we love cocktails. So to prep our fans (and ourselves) for those stellar weekend cocktail conversations, we are pleased to offer our Cocktail Astronomy post each Friday.

Given her love of anything pink, this week's Cocktail Astronomy image would make Elle, Reese Witherspoon's character in Legally Blond, swoon. In use since 1979, the Canada France Hawaii Telescope (CFHT) is a 3.6 meter optical/infrared telescope and just one of the multiple telescopes that make up the Mauna Kea Observatory on the Island of Hawaii. It is a joint facility of the National Research Council of Canada, the Centre National de la Recherche Scientifique of France, and the University of Hawaii. CFHT has produced some of the most stunning images in astronomy, from the Horsehead Nebula to the Whirlpool Galaxy...all available on CFHT's website. These days, CFHT is busy conducting the Pan-Andromeda Archaeological Survey (PAndAS), a large-scale astronomical survey by the Herzberg Institute of Astrophysics of the Andromeda Galaxy (M31) and the Triangulum Galaxy (M33). CFHT's headquarters are in Waimea, a small town of 6,000 where its 150-year old Paniolo (cowboy) culture is still going strong. The image of CFHT above was taken in 1991 on film and the color is real - red from the volcanic dust from Mt. Pinatubo scattering sunlight in the upper atmosphere plus blue from Rayleigh scattering of moonlight by air molecules in the night sky just after sunset. Thus, it is a once in a lifetime image. Aloha Mauna Kea and mahalos to Richard Wainscoat for permission to use the image and to the People of Hawaii for allowing such important and inspiring research to take place in their beautiful island. As Elle would say "Snaps for the CFHT!"