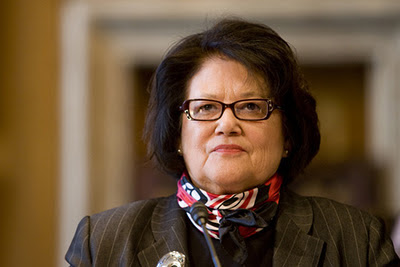 Image credit: Diego M. Radzinschi
Elouise Pepion Cobell (1945-2011), whose Indian name was Yellow Bird Woman, was a a member of the Blackfeet Indian Tribe of Montana and a great-granddaughter of Mountain Chief. Her parents were Polite and Catherine Pepion. Cobell was an Elder, Native American activist, banker, environmentalist, and rancher.

Cobell graduated from Great Falls Business College and later attended Montana State University. Throughout her career, Cobell lead many companies and organizations, from banks to conservation nonprofits, and served on many Native and non-Native boards of directors. Cobell established the Blackfeet National Bank, the first national bank to be located on an Indian reservation and to be owned by a Tribe. After decades of seeking reform and an accounting of the trust funds belonging to individual Indians, she became the was plaintiff in the groundbreaking lawsuit, Cobell v. Salazar, which challenged the United States' mismanagement of trust funds belonging to more than 500,000 individual Native Americans. In 2010, the Obama administration offered a settlement of $3.4 billion to end the class-action suit. Cobell died of cancer at age 65 in Great Falls, Montana.