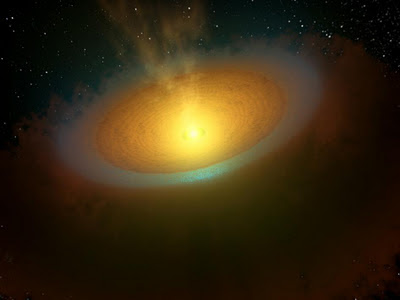 We all know to not set our cocktails down directly on our friends' fabulous mid-century wood furniture to avoid one of the biggest party fowls of all...pesky water rings. Well, when it comes to the universe, cosmic water rings are a good thing. Astronomers recently detected cold water vapor rings around a nearby young star, TW Hydrae, a 10 million year old star located about 175 light-years away from Earth, in the constellation Hydra. The findings suggest that the dusty disk, which is developing into a solar system, contains great quantities of water. The finding could mean that water-covered planets like Earth may be common in the universe. Scientists previously found warm water vapor in planet-forming disks close to a central star but evidence of large amounts of water extending out into the cooler, far reaches of disks where comets take shape had not been seen until this discovery. Michiel Hogerheijde of Leiden Observatory in The Netherlands, is the lead scientist on the project which used data from the Herschel Space Observatory, a European Space Agency mission with important contributions from NASA's Jet Propulsion Laboratory (JPL) at Caltech in Pasadena.