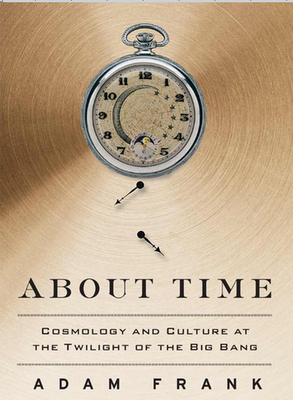 I can honestly say that About Time by Astrophysicist Adam Frank is one of the most fascinating books I've read in a long time. It seems as though books on cosmology are a dime a dozen these days so I'm pleased to report that About Time really does stand out from the pack. In particular, two things set Frank's work apart. The first will come as no surprise; Frank leads readers through the many developments in the field of cosmology with time as the central character. He explores the many ways in which time has shaped human society and culture, but also how our social evolution influences our conception of, our understanding of, and relationship with time. The second thing that sets About Time apart is Frank’s knowledge and treatment of non-Western concepts of and relationships with time throughout history, particularly in the early chapters of the book. I would have actually liked him to explore these further as I believe there are any insights waiting in these historic and present-day alternative perspectives, but it was clear that he had a sincere respect for these viewpoints rather than simply mentioning them as sentimental curiosities in our history.

The first few chapters of About Time are a grand tour of our relationship with time throughout our long history and how our material engagement at any given time period, whether it was the Neolithic period or the Industrial Revolution, shapes and is shaped by our concept of time during that period. Frank states, “Material engagement shapes both the cultural and cosmological imagination” and refers often to this “braided evolution of human and cosmic time”. Franks then goes into more detail on some of these time and material engagement evolutions beginning with developments in early agriculture and continuing on to ironworks in factories, lamps, maritime needs for time and location measurement, radio, and telecommunications. As Frank points out, all of these evolutions involved elements and applications in both culture and our understanding of the cosmos.

The final chapters of About Time are devoted more recent developments in physics and cosmology, from the standard model and string theory to the Big Bang and our accelerating universe. What is made very clear by Frank throughout his book and even more so in his conclusions, is that cosmology changes. It has changed a great deal over millennia and it continues to change in great ways today based on new discoveries that seem to happen more quickly than ever. Frank states that we should now look at the universe as a “diamond with infinite facets” and that “as culture changes it brings different facets into view” affirming that we still have much to learn about physics and the origins of the universe. Frank ends his book by suggesting that as we move on from Big Bang to explore other possible cosmologies, we are in a truly unique point in the braid of time, culture, and cosmology…one that offers us a “first glimpse at the beginning of our next evolutionary phase as a truly global culture whose material engagement embraces the whole planet.”