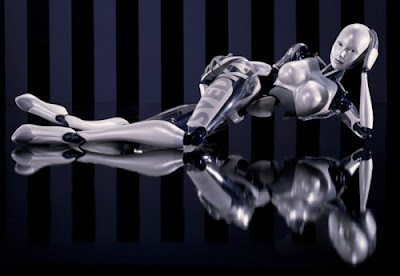 Engineers, designers, and science fiction writers have been imagining robots, androids, and cyborgs for many years. Many have become pop icons, from Forbidden Planet's Robie and the Jetson's Rosie the Made to Star Wars' R2D2 to and Blade Runner's replicants. Female robot characters are unique in that they not only make us reflect on technology and humanity, they often add another element for consideration...sensuality. From Maria in Metropolis and the fembots of the Bionic Woman to Star Trek Voyager's Seven of Nine and Battlestar Galactica's Number Six, these 'gynoids' (female robots) have succeeded in adding many layers of complexity in how we see ourselves and our relationship with technology. Japan's National Institute of Advanced Industrial Science and Technology (AIST) took this a step further when they rolled out their rockstar robot, the very lifelike HRP-4C that lip-syncs and gyrates to the latest pop music. And now a new era for female robots has arrived...promoting products.

Scantily clad women have long been used to promote alcohol brands but the Svedka Vodka robot (thus far only an animation) has received a lot of attention since her debut in 2005. Originally created by the NYC ad agency, Amalgamated the Svedka robot continues to be used in subsequent branding, such as the video created by LA-based design and animation firm LAUNDRY!. Today, the Svedka robot, along with the slogan "Voted #1 vodka of 2033", has helped make Svedka the third largest imported vodka in the US.

Shapely spokesmodels may be the oldest trick in the advertising book and the Svedka robot may indeed be doing a great job of promoting their modestly priced vodka, but I wonder if she is having a bigger impact on consumers and the general 'zeitgeist' towards female robots than just another ad campaign. Don't get us wrong, I think the ad campaign is both creative and effective but is it a good thing that the millions, perhaps billions, of media impressions of the Svedka robot on billboards, in magazine ads, on TV commercials, etc. portray her primarily as a sex object? Granted, most of the other female robot characters objectify women as well but does the Svedka robot take things a bit farther? She never talks, she simply smiles, flirts, and struts her very unattainable figure and features in a way that would make even Jessica Rabbit blush.