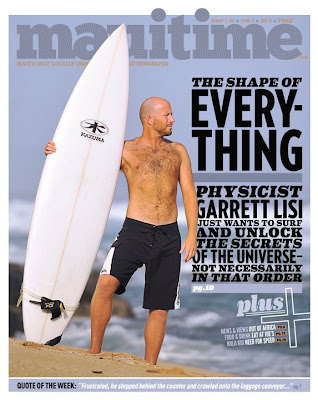 A. Garrett Lisi is an American theoretical physicist and multi-sport surfer (water, snow, air, and asphalt). Lisi completed a B.S. in Physics and a B.S. in Mathematics from UCLA in 1991 and a PhD in Physics in 1999 from UC San Diego where he received UC Regents and ARCS Foundation fellowships.

Although he has held academic positions, Lisi currently works as an independent researcher on the island of Maui in Hawaii. Lisi is widely known for his paper, "An Exceptionally Simple Theory of Everything", that proposed a theory to unify particle physics with Einstein's theory of gravitation using the E8 Lie Group (a group of mathematical, continuous symmetries that produce a particular multi-dimensional geometric shape). Lisi's theory maps forces and particles to this E8 shape, producing a stunning, yet elegant pattern to quantum scale physics of the universe. A strong advocate of living life to its fullest and balancing life with work, Lisi is as likely to be catching the next wave as he is to be writing the next chapter in modern physics.