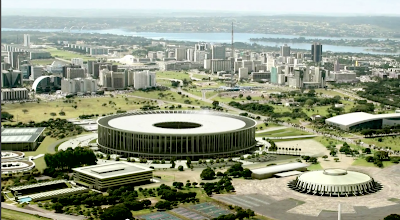 The next World Cup will be played in the planet's most sustainable soccer stadium. The Estádio Nacional de Brasília is now under construction for the 2014 World cup and the 2016 Olympics, or perhaps we should say re-construction since it is being built on the site of a former soccer stadium. In partnership with EcoArenas, LLC the architecture firm that designed the stadium, Castro Mello Arquitetos, is going for better than gold, they're going for platinum...LEED Platinum that is. LEED is an international green architecture rating system developed by the US Green Building Council that has been around for over 15 years. With elements as wide ranging as solar panels and super-efficient ventilation systems to a location near hotels and surrounding wildlife areas, there's no doubt the stadium will reach its goal. Even better, the project is just one of many efforts under a larger initiative called CopaVerde that has designs even bigger innovations in Brasilia and in sports around the world.

Below are two videos that explore the stadium and CopaVerde in more detail...