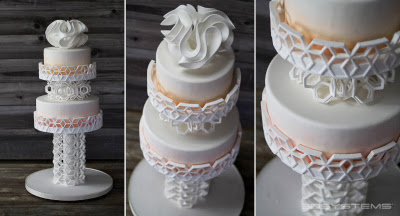 The future of prosperity: let them print cake
by Evan West

One of the most intriguing technologies in science fiction was the replicator from Star Trek. It posed an interesting conundrum for humanity: what would happen to our species if we had the ability to create anything we want? The replicator could be used to create anything, from a spare set of clothes to earl grey tea. We are in the early stages of creating a real world “replication” technology with 3D printers. They are currently being used to create many real world items. From jewelry to homes, we may be at the cusp of a technological revolution.

If you are unfamiliar with 3D printing, it is a fairly simple process. A 3D model is sent to a machine that takes a solid material, melts it down, and squirts it out in a specific pattern. Imagine using a glue gun to build a square box. You would squirt out layer upon layer of glue until you built the box. With current 3D printers, you can use the same process to create anything from a car part to an action figure. It is less wasteful than traditional manufacturing and provides creators with the ability to customize just about any design. The process of 3D printing is known as additive manufacturing, and it has been around since the 1980's. Within the last five years, the cost of using 3D printing technology has dropped drastically, and it has become available for the general public.

My experience with 3D printing
Two years ago I purchased a Makerbot Replicator, one of the first 3D printers available to consumers. I had very high hopes for the items that could be created with the machine. After a few months I ended up being very disappointed with the technology and sold the machine. One of the primary reasons for this was that the quality of the print was very poor. You could see the lines of plastic it used to create an item. It would also constantly fail the print job and would just create lines of plastic in the middle of the air, not actually creating anything except for a mess. The last reason why I sold it was because of the speed. It was unbelievably slow. In the time it would take to print a spoon, I could drive to the store, buy a spoon, go to a restaurant, eat dinner and come back in time for the spoon to finish printing. If you thought your home paper printer was frustrating, imagine that, but ten times worse.

The current status of 3D printing
Many of the issues with the early model consumer 3D printers, like the one that I had, have now been solved. Newer printers are faster, more precise, and much more reliable. The price has even gone down. But before the printers become mainstream, there are many needed improvements. For example, most of the home versions of 3D printers can only use plastic. The quality of the items you can make with plastic is okay, but there are only so many things you can create with plastic.

Current consumer 3D printers are fine for creating small plastic items. This can be good for hobbyists, design or engineering students, and people who need to create a prototype of something before sending it off to be manufactured. But they are not practical for the everyday person. However, at the rate that the printers are advancing, this could change in the near future.

The future of 3D printers
There are three main areas that 3D printing could change humanity. The first step to this change could be through more advanced models of 3D printers, which could in turn completely change the two other key areas of construction and health.

While many industrial printers can use materials like metal and glass, consumer 3D printers are currently limited to one material, usually plastic. The first consumer printer to combine printing multiple types of material in a fast a precise way could change the world. As mentioned earlier, it would be very similar to having your own Star Trek replicator. Need a new cell phone? Did a handle on your cabinet break? Use the printer in your house. You may only need to buy the raw materials, but if the current cost of ink cartridges for inkjet printers is any example, who knows how expensive the raw materials would be. This industry could be supported by companies who just sell 3D designs of their products. Want that shirt from Target? Just order the 3D model from their website and print it at your home in the color and size you want.

The way we design and build our homes may be completely changed within the next few years. Behrokh Khoshnev, a professor of Industrial & Systems Engineering and Director of the Manufacturing Engineering Graduate Program at the University of Southern California has designed a 3D printer that can create an entire home within 20 hours. Watch his TED talk to see the machine in action. It lays down layer upon layer of concrete to build the walls, all with the wiring and plumbing printed at the same time as the walls. A company in China already has a very early version of this technology and has developed a way to print 10 homes in under 24 hours.

Another areas that could impacted the most by 3D printing is in health. Organizations are already using 3D bioprinters to create strips of liver tissue. The bioprinter works just like a consumer 3D printer, but instead of using a material like plastic, it lays down human cells on top of each other to build an organ. Many people expect that we will be able to print custom organs. If you need a new liver or heart, you could have one printed for you in a lab. This has the potential to save and extend the lives of many who may not get the opportunity to receive an organ provided by a donor. Bioprinters could also be much more effective because they could eliminate the possibility of your body rejecting the organ because it can be created with your own cells.

How could 3D printers disrupt humanity?

While the benefits of being able to print whatever you want may outweigh the drawbacks, it is important to recognize the disruption that this technology may have on humanity. Here are just a few critical areas to consider in terms of how society may be changed by advanced 3D printing.

Where do all of the construction jobs go for the people who used to build homes?

What happens to all of the factory workers who could lose their jobs?

What will the delivery drivers do if you can just print what you want at home?

Would people have the motivation or desire to work or interact with society if they could just print whatever they wanted at home?

Will consumerism take over our society?

We could possibly be at the beginning of a major shift for our species. At the rate that 3D printing technology is advancing, the Star Trek replicator may not be that far off. Even though our current 3D printers are fairly basic, the technology is advancing very quickly. The implications that this may have on humanity are very great, but hopefully the benefits will outweigh the risks of this technology.