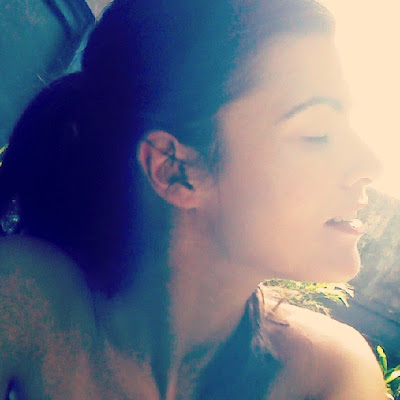 “Light your own fire, blaze your own path, work hard…and most importantly, live by example”.
- Summer Rayne Oakes

Millennial muse and renaissance woman of science, design, and culture
by Sean Schmidt

That is the only way to describe the resolve and ongoing impact of model, activist, author, educator, and entrepreneur Summer Rayne Oakes who graces the cover of this premier issue of Confab. In Oakes’ case, it is her passion for bringing pressing social and environmental issues to wider audiences that cannot be tamed. By any account, her career has enjoyed many successes but in many ways, she has only just arrived at the starting line. With her clear and consistent drive and mission, she is an excellent example of how small and sometimes simple ideas can have a big impact, as well as how one individual can spark great change.

Yes, Oakes can identify insects from around the globe. And yes, she can strike a pose on par with any of her supermodel colleagues. But her greatest skills are her ability to explain pressing social and environmental issues in every day terms, her capacity to make these issues relevant to people from all walks of life, and her gift for inspiring and empowering people to help make positive changes in the world.

In addition to “force of nature”, Oakes has accumulated many other titles across her career, from eco-model to sustainable siren. The title she prefers though is “lover of nature, an advocate for people and their environment”. The title is as fitting now as it was when she was a little girl.

Oakes grew up in a small town in Northeaster Pennsylvania where her fascination with nature began. Her curiosity about nature and respect for people and their environment continued in college years during which she earned degrees in environmental science and entomology (the study of insects) from Cornell University. She was also a Udall environmental scholar, PERC Environmental Fellow, and National Wildlife Federation Fellow. During her time at Cornell, Oakes recognized that the social and environmental issues she was studying needed to make it into the mainstream and that she could use modeling and the fashion industry to get them there.

Oakes has since appeared in Allure, Amica, Cosmopolitan, ELLE, French Vogue, GQ, Glamour, INC, Shape, and Vanity Fair. Even more impressive, these magazines didn’t just publish fashion shots of Oakes, they also recognized her for her work. Vanity Fair named her "A Global Citizen," Glamour listed her in their "70 Women of Green," CNN included her in their "Young People Who Rock" series, Amica named her one of their "Top 20 Trendsetters under 40," and Outside recognized her as one of the "Top Environmental Activists.

Like many successful models, Oakes has utilized her success to launch several entrepreneurial projects that build on her interests and passions. She wrote a best-selling lifestyle guide, Style Naturally in 2008 and then launched the award-winning online business-to-business textile and materials marketplace Source4Style in 2010 with co-founder, fair-trade specialist Benita Singh.

Oakes is the creative designer behind a line of recycled optics and shades called eco by Summer Rayne Oakes and has collaborated on collections with Payless ShoeSource, Portico Home and Aveeno.

Oakes has explored film and television as well in a variety of roles including host, correspondent, writer, producer and co-director. In 2012, she produced the award winning environmental art short eXtinction and recently launched a weekly video series called Summer Rayne Oakes Conversations. With all of these successful endeavors, it is no surprise that CNBC named her one of the “Top 10 Green Entrepreneurs.”

In 2012, Oakes was the muse behind the creation of the Prius C, a special compact Prius edition designed for a generation of “young, active eco-optimists”. Fans of Future-ish know that Oakes has been a muse for the team here in Studio F for many years as well given her cred in science, design, and culture. She was one of our first Design Idols when we launched in 2006 and she was one of the first individuals added to our Citizens of the Next Century List. She was also named our Miss Next Century for 2012.

Perhaps "Force FOR Nature" is a better way to describe our premier issue cover girl. But Oakes is very likely a force for many innovative things not even imagined yet so even this description doesn't really suffice.

Summer's day has certainly arrived, but there are still many more to come and they only promise to get better and better.