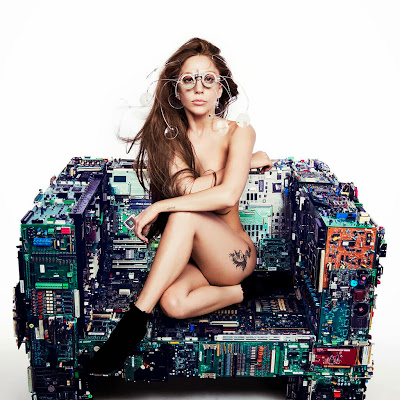 “We could belong together. ARTPOP.”
One artist comes to mind when contemplating music in “Future-ish” fashion, Lady Gaga.  The marriage of design, culture, art and yes… science could not be more exemplified by a single artist in 2013. Leading off with the November 11th release of “ARTPOP” Gaga in usual form was not shy about its intent. Hoping to create a space for her fans where creativity thrives and expression is applauded (too easy), “ARTPOP” quite literally boasts the hybrid of art and pop music. Jeff Koons’ name was on the Billboard Top 100, need I say more? Some say this is to her detriment, sacrificing the quality of her music for the sake of her art. I personally disagree, as music is art and hits all ears differently, but I digress…  On a wider scope of interpretation it is simply about the idea of one love. All people coming together, leaving discrimination and hate behind. I feel that it’s something we can all get behind. If it helps consider it the reinvention of the “hippy-era” only we’ve traded in flower dresses for bubble dresses, peace signs for “Little Monster” paws and now weed is taxed.
Gaga merely releasing an album would be like wearing jeans and sneakers on a Saturday afternoon, am I right? Following the footsteps of Bjork and Jay-Z the album was accompanied by a social-networking app surprisingly called “ARTPOP”.  Granted, other than an intensely bright and sparkling intro there is not a great deal to it. The app consists of almost every song from the album and a forum where fans can submit their fan-art, which holds true to Gaga’s vision. Other features are expected later 2014.
Science geeks here’s your part! At the “ARTPOP” album release party titled “artRave exhibit” Gaga chose to elevate her outlandish arrivals by flying in, in her dress. Gaga, with the help of her “Tech haus” and London-based design agency, Studio XO created a flying dress named “Voltanis”. With six booms in a hex formation she lifted 70 inches off the ground in hovercraft style to arrive at her album press release. Now I have no idea precisely how this works other than my previous explanation where I confidently explained to a friend “something about wind, let’s get a drink”.

Love her or hate her, take her or leave her Gaga will always have an eye on the past and a finger on the pulse of the future. Some call her a “recycled Madonna”. I say she is of her own and a spark in all aspects of art, technology and music. On that note, I can’t go anywhere without being forced to recycle so I’d say that is the wave of the future-ish?
-David Ryan || Facebook | Twitter
Like this post? Future-ish Fan? We'd love your support!
Email ThisBlogThis!Share to TwitterShare to FacebookShare to Pinterest
Labels: ARTPOP, Confluence, David Ryan, Design, Lady Gaga, Music, Music Reviews, Reviews, Science, Volantis
Newer Post Older Post Home