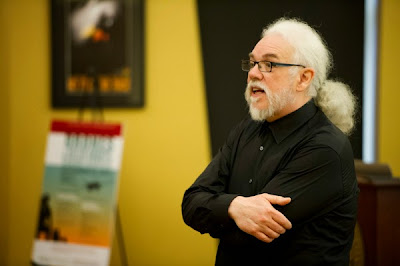 Image credit: Brooks Canaday via News @ Northwestern.
Noel Sharkey is an Irish computer scientist and a specialist in the ethics of robots, particularly the use of robots in military or political applications. Sharkey was a Professor of Artificial Intelligence and Robotics and a Professor of Public Engagement at the University of Sheffield. He later served as a chair in the Department of Computer Science before his retirement. He also holds a doctorates in psychology and science and is a credentialed electrical engineer and IT professional. Hw ia also a fellow of the Institution of Engineering and Technology, the British Computer Society, and the Royal Institute of Navigation.

Sharkey is the founder and editor-in-chief of Connection Science and an editor for Artificial Intelligence Review and Robotics and Autonomous Systems. Sharkey also chairs The International Committee for Robot Arms Control. Sharkey participates frequently in radio, TV, and newspaper articles regarding issues concerned with ethical application of robotics and AI in areas such as the military, child care, elder care, policing, surveillance, medicine/surgery, education and criminal/terrorist activity.