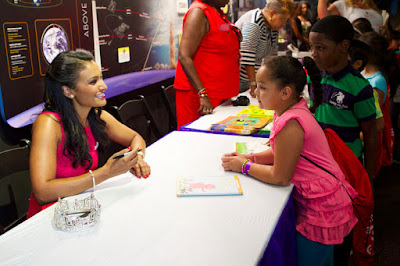 Davuluri was born in Syracuse, New York to Hindu Telugu parents from India. Her exposure to science started very early, her mother is an information technology specialist and her father is a gynecologist. Davuluri lived with her grandmother and aunt in India for a short time after she was born before starting to live with her parents again in the US when she was toddler. She did continue to return to India each summer to study Indian dance and is is fluent in Telugu, the primary language spoken ins Andhra Pradesh and Telangana, India.

Davuluri lived in Oklahoma and Michigan in her youth. Along with her school studies, she took ballet, tap, jazz along with participating in marching band, varsity tennis, and the Science Olympiad team. Later, at University of Michigan (UM) where she was a Sigma Kappa (Alpha Mu), made the Dean's List, and received awards from the National Honor Society and Michigan Merit. In 2011, Davuluri completed a BS in Behavior and Cognitive Science at UM. Although originally a pre-med student Davuluri intends to complete a graduate degree in public policy or business administration and then pursue a career in politics.

Davuluri funded her undergraduate degree with scholarship money she received from participating in pageants in Michigan. Upon graduation, she began competing in pageants again in New York where she was taking graduate courses and won the 2013 Miss New York title. In 2014 she wone the Miss America title. Although advised not to if she was serious about winning the competition, Davuluri chose to perform a fusion Bollywood and Indian classical dance routine for her talent performance in the pageant.

Throughout her reign, Davuluri utilized her visibility to advocate for diversity, gender equality, and STEM as well as focus attention on issues of harassment, racism, and colorism. She continues to speak and advocate on these and many other topics and causes, including anti-bullying and women's health.

Davuluri was named our sixth Miss Next Century in 2016.