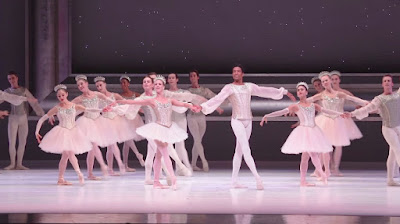 Pacific Northwest Ballet (PNB) has been "dropping the mic" on the ballet scene for several years now. Roméo et Juliette, Cendrillon, Coppélia, I could name many other performances. Well, they dropped the mic three times, no - dozens of times - in their production of George Balanchine's Jewels. The height of anticipation for this performance was probably only exceeded by the height of expectation. Without question, they were both met and surpassed.

The first of the three obvious mic drops happened as soon as they opened the curtain for the first act, Emeralds. It was love at first sight and the audience's reaction to the first glance of the dancers, staging, and costumes was quite audible. This reaction, which I an only describe as 'pure delight' occurred again at each curtain raise for Rubies and Diamonds. The mic drops just got longer and louder in the subsequent reveals. At the Diamond's review that was literally a buzz that could be heard in the hall as patrons not only oohed and awed, it was clear the exchanged a few whispers as the collective reaction lasted several seconds.

Since I don't have a ballet background, I cannot offer much in the way of a technical review of the dancing. That is also why I cannot speak to individual dancers with any sort of authority. What I can say is that, as a ballet fan, the dancing was amazing. Balanchine created Jewels to showcase the talents of his best dancers and that is exactly what happened here. PNB's principle dancers are among the best in the world so it should come as no surprise that they would excel in these roles. What also stood out to me was that the collection of works really showcased the corps as well, including the male principles and corps dancers.

Each of the acts offered unique elements. Emeralds was crisp and sublime and oddly enough evoked a connection with the northwest, particularly with the starry night background. If one was looking for a ballet that captures the beauty and grandeur of the Olympic Rain Forest, Emeralds would be it. Rubies was playful and saucy with several moments in which the male corps shined. What can I say about Daimonds? It glittered, literally and figuratively. The solo and couple moments were exquisite, the multiple times when the stage was full of dancers was sublime, and the crescendo to the amazing finale just kept getting more and more glorious.
Email ThisBlogThis!Share to TwitterShare to FacebookShare to Pinterest
Labels: Balanchine, Ballet, Ballet Reviews, Jewels, PNB, Reviews, SeanChron, Seattle
Newer Post Older Post Home