Dave Down Under - Dispatch 2 - Learning the Logistics 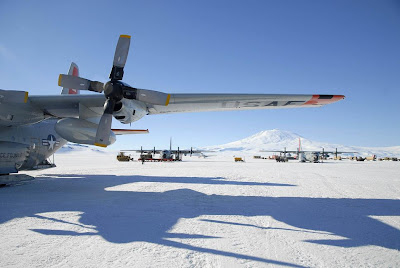 A lot has happened since I wrote four days ago. It has been primarily about learning logistics and absorbing the vaunted (again, perhaps infamous) culture of McMurdo Station. To lay the foundation for some of the imagery and your imagination, you should understand this is a frontier town. Unlike most tumbleweed or tundra frontier towns, this one is inhabited half by eggheads, and half by the rough hewn "get it done" staff.

A quote regarding people who work at McMurdo: Antarctica is at the bottom of the earth, so anyone not tied down eventually gravitate down there. There is a grain of truth to this saying. There is a sense of wanderlust to many of the people here. It's a place where the reclusive people who don't fit in well in the main stream, but don't accept that they have to march to the standard drums find a temporary haven. Temporary, because few people can handle the closeness of the community for more than a few seasons. The few that do make a life out of working here seem to veer that much further off of the norm.

One of the fascinating aspects of living in such a small communities is how they interact with each other outside of work. Honestly, I can't write in-depth on this. It will require at least one more significant visit to the station. The small amount I have witnessed is the night I went out to the bar to meet Ann. Unfortunately, I didn't find her, but was able to hang out Robert, a colleague of John's came over with a friend and asked if they could join me. The wine bar is the most "civilized" of the three bars at McMurdo. It is quite dark, rather small, and only serves wine. So this guarantees that is the most heavily weighted with "beakers". There were pockets of reclusives working on their computers, and pockets of rowdiness. However, for the most part, the scene was that of lively chatting. I also hopped over to the other two bars, although much more briefly. The second bar, Southern Exposure, was stuffed with smoke and very loud. This seemed to be where the workers really let loose. After ascertaining that I knew no one there, I quickly left for the third bar. There, I found one of my roommates, and it was a non-smoking bar with pool, so I made this my last stop. This bar, Gallagher's, was a blend of the two others.

The next day, Sunday, was a day of learning for me. I finally started learning about all of the activities that happen in and around McMurdo. More often than not, I was learning them after they were options for me, but I'll know better for the next time I get to spend here. Lectures, dance lessons, volleyball teams, tours, free training of various sorts, Burger Bar, philosophy discussions… there's a lot happening here.

Sunday evening, I did manage to get out and hike up the nearby Ob Hill. I started at 8pm. This is an easy thing to do because, as you guessed, it is complete daylight. However, the wind was really whipping through. By the time I made it back down (about an hour), my face was chilled down so much that my facial muscles weren't operating properly.

Monday was another mellow day for me. John and I had a few things to take care of, but otherwise, I was working on my own stuff. Mitch, a fellow grad student and roommate was working all day on the mindless task of washing hundreds of sample bottles. After several hours of working on my computer, I spent an hour and a half assisting him and a colleague in the chore so they could be freed of the chore. This evening ended with three other grad students drinking beer and walking up Ob Hill again. This evening, the air was dead still, except for at the very top. The light was stunning, and it was warm. We didn't leave our room until 11:45pm. Full daylight.

The next morning, Tuesday the 6th, was a little painful after our late night, but we were fueled by our goofy adventure the night prior. This morning Mitch and I were due to check in at 8:30am to Happy Camper training, the basic survival course. For logistical and litigation reasons, they require that anyone doing field work outside of the station (even day trips) take the winter survival course in the event of a plane/helicopter crash, or if a storm came in and flattened one's tent. We started in the classroom listening to various scenarios and solutions to the myriad things that can go wrong here on this frontier continent. From there, we loaded into the transport vehicle. Transport vehicles are an interesting topic for this region, but I will save that for another dispatch. After some more instruction in the field hut, we then moved out to our camping area. Our first project was to set up the Scott tents. John and I will be sleeping in Scott tents while in the field. These things are rather different from standard camping tents. They weigh about 90 lbs, have four straight poles and are made of a very sturdy rubberized canvas. They have straight walls and no built in floor. Apparently, they are built to withstand ~100 mph winds. We buried all of our BFC sleep kit bags (large duffels containing our sleeping bags and pads) in a heap of snow to make the shell of our quinsy (snow shelter), and cut out snow blocks for a wind wall. Eventually, the instructors left and we were left to our own devices. I took over on digging the tunnel to the quinsy. All said and done, this took about four more hours of snow sawing, and shoveling in very close quarters. Mitch and I were spanked by the time we actually finished the connecting hole, and dug out the bottom of the shelter to fit three people. Originally, we were expecting a shelter that would fit 5 or so people. We ended with very snug space for three. But it totally kept out the wind out, was fairly warm, and the roof glowed a soft, lovely blue.

Sleeping in such a new environment can be a challenge, especially in close quarters with two people you barely know. Fortunately Mitch and May were both great companions, being excited, easy going and good humored about the challenges we had in not knocking off snow onto ourselves, not rolling over into each other or a snow wall and frequently needing to get up, shimmy out of the very skinny access hole and pee. After the day's exhausting work, I was hungry for about 24 hours straight. My tummy growled all night. My muscles all over my body are still sore and tight. I was dry, but needing to pee quite often. I think I slept a total of about 4 hours this night… the same amount I slept both the night prior, and also the night after (writing up this dispatch). My eyes hurt quite a bit as I finish this dispatch. As I type, and I look out the window, the snow is coming down, not hard, but more than a dusting. From what I heard, this is enough snowfall to stop the helicopter flights. The schedule has already been backed up due to the snow yesterday morning. This will probably further delay our helo flight, possibly until tomorrow.

I had lots more I wanted to write about, but we are tentatively scheduled to fly out of here this morning, and I have an hour to pack a lunch and haul all of my bags out to the flight pad. If our flight gets delayed, I'll probably be sending out an addition to this dispatch.