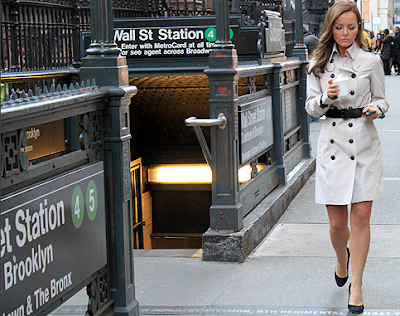 9/8/11. Back in 2007 when Future-ish was barely out of the starting gate, Nicole Lapin was the very first post in our 'Emerging Minds' profiles. At the time, she had already been the youngest anchor on CNN for a year (at age 21!) and had just started a special series at CNN called Young People Who Rock in which she interviewed people under the age of 30 who were doing remarkable things. She also was part of a campaign called 'Being Smart is Cool' with the Starlight Starbright Children’s Foundation. In 2010, Nicole joined CNBC as anchor of CNBC’s Worldwide Exchange where she became well respected for her in-depth interviews, spot on analyses, and ability to present information on world developments, commerce, trade, and finance in ways that were accessable and valuable to audiences ranging from Wall Street to Main Street. Since that time, she has also served as a correspondent on The Today Show, MSNBC, The Golf Channel’s Morning Drive and Wake Up With Al and is a frequent online contributor to CNBC.com, USA Today, and The Huffington Post. There's no question that her smarts and great style have brought many new fans to both CNBC and the broader world of business and finance news. Her beauty and brains placed her easily on our list of Glamour Geeks.

So I was very excited to see on her blog today that Ms. Nicole has started a new chapter in her career. At age of 27 she is starting her own production company, 'Nothing But Gold'. The enterprise will be a multimedia production company focused on creating accessible financial content across various platforms. Along with the production company she has several books in the works and an online personal finance and investment project in development. One of the things that has always impressed me about Nicole is her passion for inspiring young people to be all they can be. She's also notched that up in this new chapter...she will continue her philanthropic efforts by launching her own charity, “Lost Girls,” which will provide a helping hand to young, well-educated women looking to find work during the tightest job market in decades by offering gently-worn workplace attire and specialized career advice.

Given all this going on in Nicole's new chapter, it's clear that a new financial guru has arrived...consider her a younger, hipper, and (sure, I'll say it) hotter Suze Orman.
Email ThisBlogThis!Share to TwitterShare to FacebookShare to Pinterest
Labels: Nicole Lapin, SeanChron
Newer Post Older Post Home