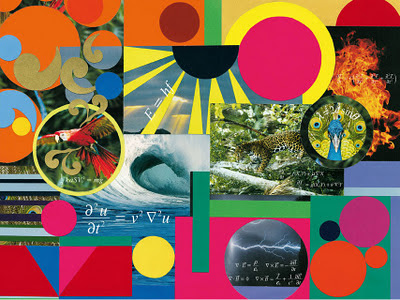 "O Paraiso", 2011. Beatriz Milhazes.
A new transdisciplinary exhibit of math and art recently opened at the Fondation Cartier pour l'art contemporain in Paris. Titled Mathematics: A Beautiful Elsewhere, the exhibit offers visitors “a sudden change of scenery” in the words of mathematician Alexandre Grothendieck. The exhibit was developed with the Institut des Hautes Études Scientifiques (IHÉS) under the patronage of UNESCO and utilized IHÉS mathematicians and scientists to curate diverse works from many artists, including some celebrities such as David Lynch and Patti Smith. The exhibit runs October 2011 to March 2012.