From Chanel N°5 to Space Exploration 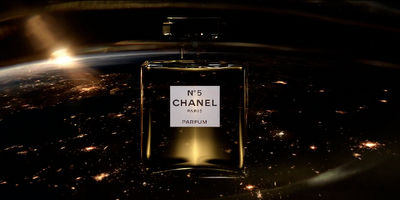 The new Chanel N°5 ad campaign which features Brad Pitt, their first male spokesperson ever, has people across the planet talking. Well, actually they are trying to make sense of what Pitt is saying in the ad. Written by GQ Style Guy Glenn O'Brien and filmed by Atonement director Joe Wright, Pitt's surprisingly casual attire and breathy monologue titled "Wherever I Go" are perfectly mysterious:


"It's not a journey. Every journey ends, but we go on. The world turns and we turn with it. Plans disappear, dreams take over, but wherever I go, there you are: my luck; my fate; my fortune. N°5, inevitable."

Perhaps we're biased given our fetish for the future and all, but our take on the ad campaign is that it references the incredible tipping point we are at with science, technology, space exploration, and everything else to come in the next century. The voice of humanity speaking about our future, a direct response to Star Trek's "Space, the final frontier." Curiosity, discovery, mystery...muses for the 21st century if you will.

The ad campaign also confirms something we've long known here at Future-ish, that wherever we go in the future, humanity will take our most important attributes with us, our individuality and our aptitude for self-expression. Some day in the 25th century, a female spaceship captain will return to her quarters, slip on her biometric robe that measures health vitals, and remove the cap of her Chanel N°5.