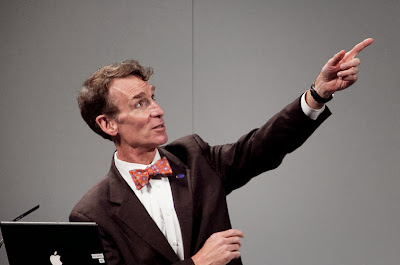 Image credit: Ed Schipul
Bill Nye, aka "Bill Nye the Science Guy", is an American scientist, science educator, and actor. He is considered by many to be the most famous and recognized scientific personality in popular culture today.

Nye received a BS in mechanical engineering form Cornell University in 1977, the famous astronomer Carl Sagan happened to be one of his professors. Nye worked at Boeing in Seattle for several years and then as a consultant to the aeronautics industry. He applied to be an astronaut at NASA several times as well.

Nye's career as 'Bill Nye the Science Guy' started on the Seattle late night comedy show, Almost Live. Nye then worked on several other television shows including the PBS series, Bill Nye the Science Guy that aired from 1993 to 1998. Since then, Nye has continued to appear in television shows, movies, and other entertainment media as 'Bill Nye the Science Guy' and in other roles. He has written several books and appears as a science advocate on many talk shows including Larry King Live, CNN, and many others. In 2013, Nye, a self-proclaimed swing dancer, competed in Dancing with the Stars lasting to round three when he sustained a tendon injury.

Nye has participated in scientific projects such as the Mars Rover missions, served as a spokesperson for many special projects and causes, and even holds several patents. Nye has been awarded three honorary doctorates and in 2010, he received the 2010 Humanist of the Year Award from the American Humanist Association.

Nye's sustainable lifestyle choices and trademark bow tie has landed him on our Stylish Scientist List two years in a row.