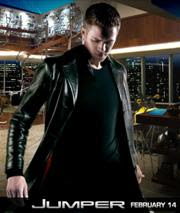 Teleportation seems to be all the buzz these days with the release of Jumper and Michio Kaku's book Physics of the Impossible. Director Doug Liman's Jumper opens February 14 and given that its from the makers of Bourne Identity and Mr. & Mrs. Smith, it promises to be not only a fantastic thriller, but a sci fi geek's dream too. In Jumper's case, teleportation is genetic (a bit Heros maybe) but hey....its still teleportation. Kaku's new book, on the other hand, looks at the actual status of research on topics such as time travel and teleportation. And some of it is not as far fetched or Star Trek as you might think given that there is experimental evidence that both time travel and teleportation do, in fact, exist. So whether your sci fi flavor is more Einstein or Captain Kirk, there's something in today's teleporation for everyone.
Email ThisBlogThis!Share to TwitterShare to FacebookShare to Pinterest
Labels: Confluence, Movies, Science
Newer Post Older Post Home