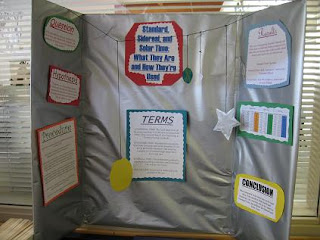 I'm very excited to report that Future-ish made its official Seattle dubut last week when I attended a science fair at an north Seattle elementary school as part of a group of scientists that provided feedback to the budding young scientists. I must say I was ASTOUNDED by the students' efforts and scientific understanding. I provided project feedback to both 3rd graders and 5th graders and in both cases, I wsa blown away. Their science was very clear and simple and their presentation skills were just as impressive. The above project for example, from a 5th grader, not only tested several ways of telling time, impressive in itself...it incorporated glitter! The teacher that organized the event had the idea of including local scientists last year. The opportunity to interact with scientists got the students so excited the teacher decided to continue the practice. This year, there were three times - THREE TIMES - as many students that participated in the fair. I guess scientists can be rockstars afterall.