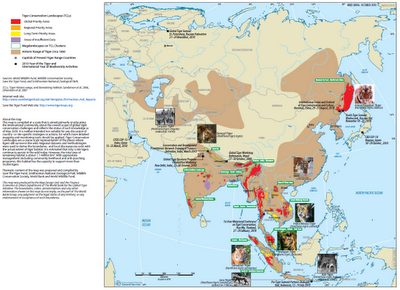 I've been hearing a lot about the first ever International Tiger Forum being held in St. Petersburg, Russia November 21-24, 2010. The coverage has been extensive, partly due to the fact that Russian Prime Minister Vladimir Putin and The World Bank are very involved. From the reports I've heard and read, it sounds like some great progress was made in starting the campaign to save the species throughout its many and diverse habitats in the wild.

I'm psyched about the forum for several reasons. First, my academic background is in conservation biology so I'm always happy to see the subject get international attention. Second, as the son of one of the first female zoo administrators in the US, Ingrid Schmidt, I happened to be raised around lions, tigers, clouded leopards, snow leopards, etc. I know...a bit crazy but this happened because in the early part of her tenure at the Rio Grande Zoo in Albuquerque, NM (1970s-1980s), my Mother was often in charge of hand raising the cat species at the zoo since zoo-born 'kittens' were often abandoned parents. Other zoo staff took on other species, but my Mom was all about the felines. She would later often be referred to as "Madame of the Cat House". So...I have a bit of an affinity with all the cats.

Later, I became very involved with the International Snow Leopard Trust and even did my senior thesis at the University of Washington on zoos of the Former Soviet Union. I was interested in the ability of Post-Soviet zoos to take part in international conservation, education, and research goals. I visited 15 zoos in seven of the newly independent states (from Uzbekistan to Estonia) and among the many challenges that faced Post-Soviet zoos after perestroika, conservation of species in the wold was at the top of their list...Siberian tigers, Amur leopards, snow leopards, and manul (a small forest cat) were some of the most critical species mentioned.

Third...I was very pleased to see that The World Bank is so involved in the process. I recently finished my Masters of Arts in Policy Studies at UW Bothell and my research topic was conservation finance. The scale or organization and finances of what is needed to protect a species like the tiger, with its many and diverse habitats across many different countries, is enormous so it will take the likes of The World Bank and the Global Environmental Fund (GEF) to provide support needed for these efforts.
Email ThisBlogThis!Share to TwitterShare to FacebookShare to Pinterest
Labels: Conservation, Russia, Science, Science Spotlight, SeanChron, Tigers
Newer Post Older Post Home