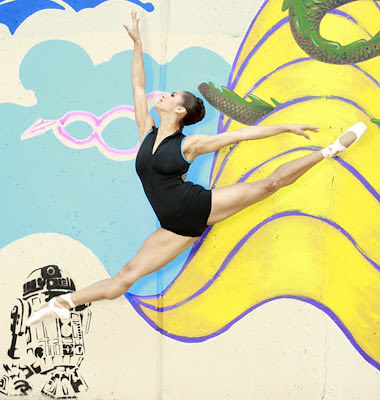 In the summer of 2007, American ballet dancer Misty Copeland became the first African American female soloist at the American Ballet Theatre in two decades. Copeland had her first ballet lesson at the San Pedro Boys & Girls Club at 13, won first place in the Los Angeles Music Center Spotlight Awards at 15, and joined ABT at 19...all while maintaining a 3.8 GPA through her junior year of high school. Since that time Copeland has performed in dozens of ballets as well as many other dance and artistic projects. She inspires many young ballerinas but is a role model particularly to African-American and other minority girls who face challenges in reaching their dreams. Copeland will be inducted into the Boys & Girls Club of America Alumni Hall of Fame in 2012.
Email ThisBlogThis!Share to TwitterShare to FacebookShare to Pinterest
Labels: American Ballet Theater, Ballet, Boys and Girls Club, Culture, Culture Icons, Dance, Misty Copeland, NYC, San Pedro
Newer Post Older Post Home