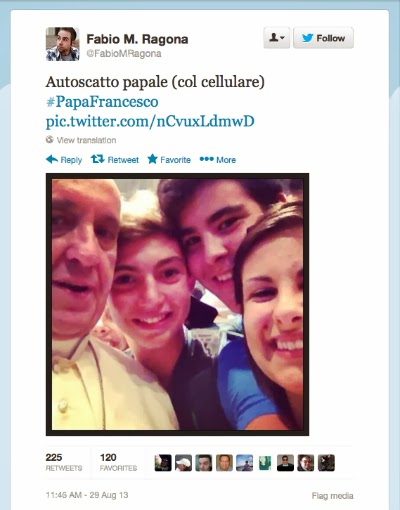 On November 19, 2013, the Oxford Dictionaries pronounced 'selfie' as the international word of the year.

According to Oxford Dictionaries, 'selfie' was first used in 2002 in an Australian online forum. But it is clear 2013 was the year of the selfie as the term became hugely popular in both mainstream media and social media. Of course, some might argue that artists have been producing selfies for centuries in their formal and stylized self-portraits and photographs, but we're just happy to see that it is a shining example of how technology and pop culture can influence one of the oldest and formal institutions on the planet.

And...according to the Today Show's informal poll, the August 2013 selfie of Pope Francis with a group of young fans posted on Twitter by Fabio Ragona is the favorite selfie of 2013.