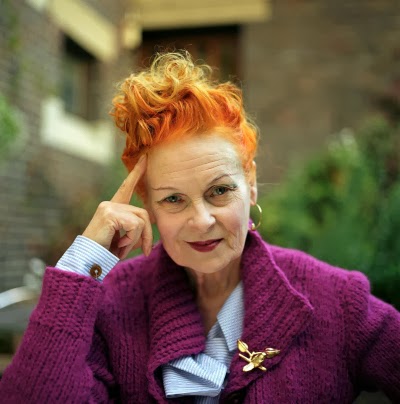 Westwood studied fashion and silversmithing for a short time at the Harrow School of Art in the University of Westminster and then took a job in a factory before becoming a primary school teacher and beginning to design jewelry. She married Derek Westwood in 1962 but the marriage ended when Westwood met musician, artist, and band manager Malcolm McLaren. Together with McLaren, Westwood would help define the punk and new wave fashion period, partly by designing clothing for some of the leading punk bands of the era.

Westwood and McLaren opened a boutique together in 1971 called Let it Rock, known today as Worlds End following several other names. The two had their first runway show, The Pirate Collection, in 1981 and Westwood continues to show today.

Westwood now has owns several shops in London and MIlan, has multiple franchise stores throughout England and in New York City, and has showrooms in Milan, Paris, Los Angeles and Honolulu. She has designed the British Royal Family and celebrities.

Westwood was named British Designer of the Year in both 1990 and 1991. In 1992, Westwood was awarded the Officer (OBE) class of the Most Excellent of Order of the British Empire by Queen Elizabeth. She was later awarded the higher level Dame Commander (DBE) for her accomplishments in fashion in 2006.

In addition to her fashion accomplishments, Westwood is well known for her political activism for causes such as nuclear disarmament, human rights, climate change, and consumerism. She is also passionate about the role of culture in shaping the future referring to culture as "the anchor that holds us together as a people and gives life greater meaning" in the 2011 Canadian television documentary, Vivienne Westwood's London.

Below is Westwood's 2011 TEDxObserver video in which she also talks about the importance of history, heritage, and culture: