Navigate: Contents || << Previous | Next >>
Every great magazine features comics to both entertain and enlighten its readers. Confab is pleased to offer a little comic relief in each of our issues as well. In this issue, we feature the little cyber creations of environmental health scientist, Jenna Armstrong. 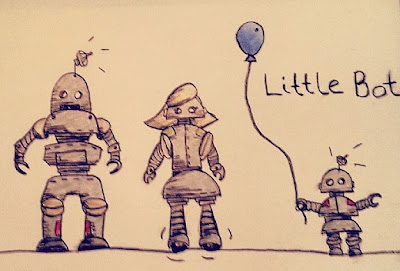 My work at the Centers for Disease Prevention and Control (CDC) involves a lot of time doing data analysis of environmental diseases and knowledge of the monitoring equipment used to look at contaminants. Similar to most scientific and engineering professions, my job requires a great deal of logical and analytical thinking. I’m at my peak using my left brain -- running experiments and testing statistical models. However, being a successful scientist also means dedicating an amount of time to free thinking. In other words, imaginative scientists are at an advantage compared to their peers because they are able to generate new ideas and ways to explore data. They must also be able to make inferences about likely outcomes, whether or not the data is exact. At the end of the day, I maintain the balance between rationality and creativity by indulging in my childhood passion of painting and drawing.

In recent months, I have begun to draw a series of “Bot Cartoons” after I heard the story titled “How Technology is Eliminating Higher Skill Jobs” on National Public Radio (NPR). The story discussed the potential "replacement" of jobs initially done by humans (e.g., bank tellers, ticket vendors, pharmacists) with jobs done by robots. Since I got an advanced degree in a STEM field and spent over a decade in school, I always figured I would be immune to the effects of rising unemployment in our country. But after learning about the future of robot use in higher skill jobs, I wondered if these “Bots” would one day replace me too. If so, how soon? 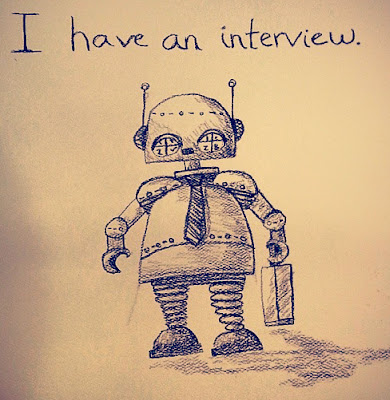 In the cartoons, I like to give robots humorous, personified characteristics because it highlights my significant advantages over these synthetic creatures as a human: a personality—made up of my creativity, wit, spontaneity, and intuition. Surely, robots today cannot display compassion, subjectivity, or humor exactly as humans do, but this is up for debate. Although IBM’s “Watson” was a quick genius at Jeopardy, when “he” was unable to understand the context of the clue, it resulted in epic (and often hilarious) failure. Robots are not able to indulge in addictions, fall in love, or live familial lives. These are qualities that cannot be performed purely based on calculation. However as artificial intelligence technology progresses, I am not so sure that will remain the case. 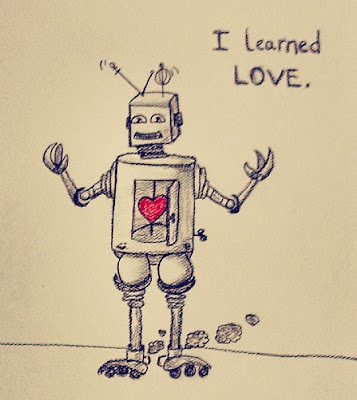 In today’s entertainment industry, the robot vs. humanity issues are a constant source of Hollywood material-- any Trekkie is well-versed in the emotional struggles faced by Lieutenant Commander Data; and the new show, “Almost Human” on Fox is based solely on the existence of an extraordinary line of robots built to “feel”. In addition, the 2013 film, “Her” is a science fiction romance produced by Spike Jonze about a man who falls in love with an artificial intelligence device that is designed to adapt and evolve like we do. Although these examples are fictional, real life robots are now being designed to understand emotion and common human interactions. For example, at the University of California San Diego, researchers are teaming up with Japanese engineers to design a humanoid robot “boy” that uses facial recognition strategies to interact with humans in real time. The robot can “learn” from humans on how to do complex interactions and eventually, “he” will be used for therapy sessions with special needs children. In fact, the goal is for “him” to teach these children how to have social interactions. 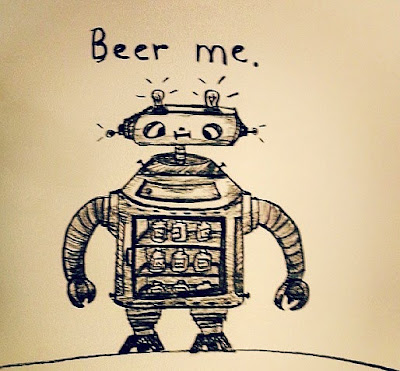 Such modern advances in technology are my inspiration for Bot Cartoons, although the themes occur on a much simpler level. Like Hollywood, my goal is simple fun and entertainment. What if these bots become more human? Will they want to read books, even if they could quickly download the same information? Could they enjoy eating chocolate, even without a complementary digestive system? Will they want to fall in love with other bots—or even humans, without a soul? Only time will tell, as robots begin to learn from humans. Perhaps we, too—can learn from them. 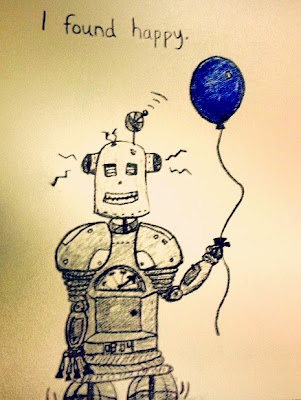