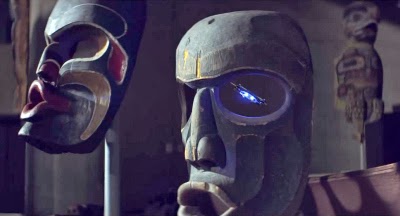 Lexus has partnered with Sam Brown of Rogue Films and KMel Robotics to create a new short in the Amazing in Motion creative series. Swarm is the second production in the series that explores the beauty of motion through technology and film (we reported on their first project, Steps in September 2013.

Swarm (below) follows a group of curious quadrotors as they playfully explore a city at night. The resulting video (which doubles as a TV ad) is charming, the quadrotors cute, and the soundtrack by Jonathan Goldstein is pretty amazing as well. The project website also provides lots of behind-the-scenes stories and short videos on the making of the project which are equally well produced and interesting. Inside scoop on the design and 3D printing of the quadrotors, the concepts behind their curiosity, and the making of Swarm are all embedded within the project website. Given my fondness for intersections of science and culture, I particularly loved the scenes from UBC's Museum of Anthropology in Vancouver with the quadrotors wizzing in and around the ancient masks (not sure where the dinosaur came from though).

My only thought was that a swarm of robots checking us out and then zooming off into the night might not be such a good thing. If you added a different soundtrack to the video, you'd come out with a very different experience for sure. These little quadrotors are quite cute but given all the buzz around drones these days, their big brothers and sisters might not be so playful.

Don't get me wrong, I love the Amazing in Motion projects, and especially these little quadrotors (I'd love to have one), but my scifi overloaded brain can't help itself. And that's why this post landed in our RobotWatch collection. Oh, and the segment of the Lexus LF-NX concept car at the end of Swarm looks a little too Cylon as well.