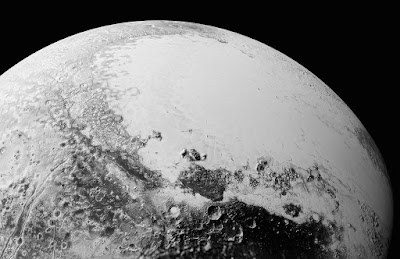 Image credit: Credits: NASA/Johns Hopkins University Applied Physics Laboratory/Southwest Research Institute
Here at Future-ish, we love astronomy and we love cocktails. So to prep our fans (and ourselves) for those stellar weekend cocktail conversations, we are pleased to offer our Cocktail Astronomy post each Friday.

It's official...Pluto is back on the planetary dating scene with humanity and according to NASA, the dwarf planet's new profile pics are 'Over the top'. In fact, close up images of Pluto from NASA's New Horizons spacecraft released in September 2015 indicate incredibly diverse surface features suggesting a very interesting past. Given Pluto's new multi-faceted personality, what do these new images mean for our long term relationship with Pluto? As the NASA announcement states: "it's complicated". One thing is for sure...we expect a full-on love fest for Pluto.

>> Read the full announcement for more juicy details.
Cocktail Pairing: given our up and down relationship with Pluto, a Bitter Crush
Email ThisBlogThis!Share to TwitterShare to FacebookShare to Pinterest
Labels: Astronomy, Cocktail Astronomy, Cocktails, Pluto
Newer Post Older Post Home