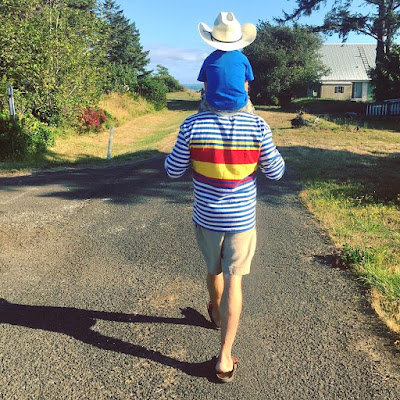 A photo of me and my nephew at the beach.
Country music strikes a chord with this small town farm boy in the big city
by Sean Schmidt

I knew when I got the inspiration for this issue of Confab that I wanted to end it with songs by country western singers that inspire me and give me hope for the future. These songs speak to an inclusive future that improves the quality of life for everyone around the world. Lofty? Yes. But ideals that - also yes - even country singers like to croon about. I find myself asking more and more, what kind of world will our children and grandchildren inherit from us? The decisions we make today are what they will have to contend with some day. When I need to chill out, reflect, and refocus, I often turn back to country music.

Those who know me are privy to the fact that I often wear one of my 9 cowboy hats around...a lot. In the winter, you might find me in a Norwegian sweater, cowboy hat and boots. In the summer or in Hawaii, I'm in shorts, flip flops, and yep...a cowboy hat. Throw on my oxblood color boots and a cardigan and I'm likely to post an Instagram photo about how "the Preppy Cowboy rides again." For me it goes back to my Nebraska farm days, the hats make me remember the good times and good people there. And just as important, cowboy hats block the sun from my bald head...LOL. So the fact that a bunch of songs by country singers inspire me as much as other singers from other music genres, community leaders, Veterans, creatives from across many arts fields, activists, and of course...scientists, designers, and cultural leaders (this is Future-ish after all) should come as no surprise.

But, these same songs often do surprise my friends. My friends who are country music fans are surprised because they didn't realize these singers (and many more to be honest) were into these issues, even though some of these songs were hits in their day. My friends who are not who are not country fans are even more surprised...that these songs even exit and that country singers are just as passionate about these issues as many others across the country and world. I guess it just shows that there's a whole lot more learning, sharing, and supporting each other that needs to go on out there.

So sit back with your favorite coffee drink, cocktail, or cold one and enjoy the show that I've put together for you below.
Dolly Parton's Peace Train
I remember seeing this performance on TV back in 1996. I had heard the song many times by many artists but I was - and still am - a HUGE fan of Dolly Parton's so this version really got me fired up to go out and save the world. To be honest, it still does.But then any Dolly Parton song or video pretty much does the same thing

Alan Jackson's Where Were You
This next song is a fairly recent performance of a song Alan Jackson came out with back in 2001 as a response to 9/11. I was absolutely blown away by how beautiful it was and by the lyrics, because it's primary call to action was to love one another. I still get chills when I hear this song.

Brad Paisley's Welcome to the Future
Next up, we have a song that literally floored me when I first heard it in 2009. Brad Paisley's Welcome to the Future literally kicked my ass when I first heard it and then tracked down the video. Everything, EVERYTHING, I wanted to do with Future-ish was wrapped up in one kick-ass country song. To this day, I can't play this song enough. I got to hear him sing it in a concert recently. He actually had several songs with references to NASA, science, diversity, and cultures around the world. Guess he's just another good ole boy STEM educator.

Tim McGraw's Humble and Kind
Tim McGraw's Humble and Kind completely took my breath away when I first saw the video in 2016. I had heard the song many times on the radio but you really don't get the full impact of the song and lyrics until you've seen the video. I also had the chance to hear the song live that same year and in person, it's even more impactful. The accompanying book is just as impressive and inspiring. I once handed the book to a friend and asked him what he thought of it. When I told him it was also a country song by Tim McGrow he too was blown away. I could have this song playing on repeat for days, it will never get old.