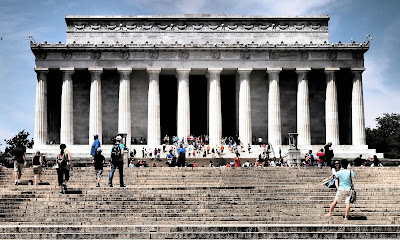 Welcome to issue 002 of Confab, Pillars of Hope. This issue is all about the people, projects and ideas that give us hope for the future. In a time when the world seems a bit (and sometimes WAY) off the path towards an inclusive future that would improve the quality of life for everyone on our planet, we decided here at Future-ish, we needed a little jolt of positive outlook. We hope you enjoy our contributions and that they bring a little positivity into your world.
By Sean Schmidt

The concept of this issue was on my mind for a long time but it was a photo a friend took of herself and her boyfriend in front of the Lincoln Memorial that provided the final inspiration for "Pillars of Hope". No, it's not the picture above...I'm still trying to convince my friend to let me post it publicly so an update may occur at some point in the future ;-)

The composition of my friend's photo was such that they were a small couple in the lower right corner of the photo and the Lincoln Memorial towered over them in the background. It was a beautiful photo because of the composition but also the lighting, the angle, scale and the human/built environment juxtaposition. But it also really inspired me. It is couples like my friends that give me great hope for the future. They are engaged in issues that are passionate to them, they are active, they do small things to inspire each other, and they each in their own way inspire many, many people around them with their work and exuberance for life. They are also people of color (POC). That was both incredibly important in the impact of the photo on me but I also realized that it actually could have been any of my friends in that photo and I still would have been just inspired.

What I realized is that it is people that are engaged in shaping the future in positive ways that inspire the hell out of me. These are people that think of others before themselves, people that lift others up, people that look out for the underdogs in our own neighborhoods and across the whole planet, people that stand up to injustice and bullying, people that step up to help others in times of hardship...I could go on and on about the incredible people that I am lucky enough to know personally, as well as the many people I run across in news stories or yes...even on Facebook.

In early 2017 I posted a photo on Facebook of Nellie Oleson and Laura Ingalls, characters from the television series Little House on the Prairie and captioned it:


"In a world filling up with more and more Nellie Olesons, I'm glad to be a Laura Ingalls...not perfect but with a much better moral compass ;-) #TeamHalfPint" 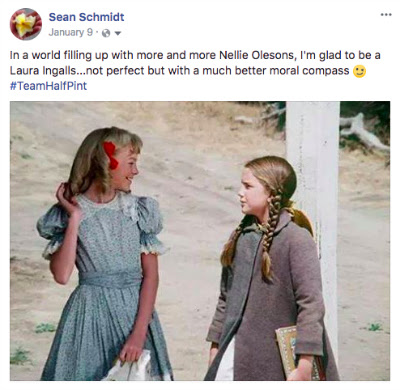 I still refer back to this post now and then and actually reference #TeamHalfPint all the time. I do want to acknowledge that the TV series presented a different story than the books by Laura Ingalls which have been called out for their racist and cultural insensitivity elements. This post by Laura McLemore, Historical Perspective or Racism in Little House on the Prairie? is an excellent starting point for exploring this.

But going with the TV series version, I often wonder why folks that identify so strongly with the morals and values behind TV shows like Little House, The Waltons, and Dr. Quinn, Medicine Woman don't call bullshit on more things these days. We all know how things are SUPPOSED to end in these shows. Sadly, I think it may be because many of these folks BECAME Nellie Olesons themselves. As I said in my post, I'm still happy to be a Laura Ingalls...not perfect, but with a better moral compass :-)

I hope, along with this issue's other contributors, that this edition of Confab does indeed spark it's namesake: confabulations: short, informal, private conversations around what gives us hope for the future.