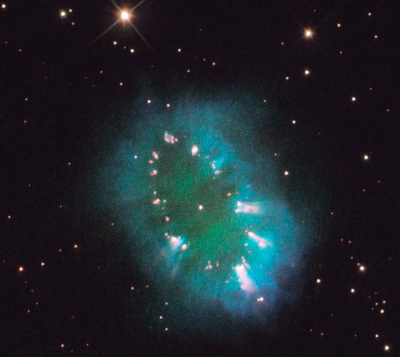 Image credit: NASA, ESA, and the Hubble Heritage Team (STScI/AURA)
Here at Future-ish, we love astronomy and we love cocktails. So to prep our fans (and ourselves) for those stellar weekend cocktail conversations, we are pleased to offer our Cocktail Astronomy post each Friday.

This week's Cocktail Astronomy comes to us from HubbleSite and isn't just cocktail material it's Breakfast at Tiffany's worthy. PN G054.2-03.4, aka the Necklace Nebula, is a planetary nebula located about 15,000 light-years away in the northern constellation Sagitta (the Arrow). Discovered in 2005,the nebula is the aftermath of a giant star that came too close to its binary companion. Around 10,000 years ago one of the aging stars grew and eventually engulfed its companion star. The image above, captured on July 2, 2011 by Hubble's Wide Field Camera 3, showcases the dense gas 'diamonds' in the ring. The ring measures 12 trillion miles across and was produced by the gas that escaped along the giant star’s equator due to centrifugal force. The colors are a result of hydrogen (blue), oxygen (green), and nitrogen (red)...though for this post we like to describe them as sapphire, emerald, and ruby. Cheers darling!
Email ThisBlogThis!Share to TwitterShare to FacebookShare to Pinterest
Labels: Astronomy, Cocktail Astronomy, Necklace Nebula, Science
Newer Post Older Post Home