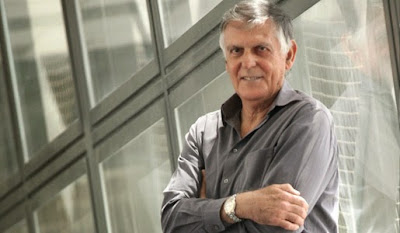 Image Credit: Technion – Israel Institute of Technology
Strike a Position | New and Noteworthy in the world of Politics
by Bill Pickert

A Nobel laureate scientist could soon be the President of Israel.

Dr. Dan Shechtman, a 2011 Nobel Prize winner in Chemistry for his work on quasicrystals. He is currently the Philip Tobias Professor of Materials Science at Technion - Israel Institute of Technology, an Associate of the US Dept of Energy's Ames Laboratory, and Professor of Materials Science at Iowa State University. Schechtman announced his candidacy for the Presidency of Israel in January 2014.

Schechtman's 1982 discovery of a regular but non-repeating orderly arrangement of atoms in aluminum transition metal alloys was dismissed by many because it flew in the face of 70 years of modern crystallography research. He was the first to observe the phenomenon when he looked at a rapidly cooled blob of aluminum alloy under an electron microscope. He expected to see a chaos at the atomic level but the arrangement was marked by a regular, non-repeating pattern, like an Arabic mosaic. These medieval aperiodic mosaics have been used as models for scientists seeking to understand the atomic structure of quasicrystals. Although his discovery was disputed for decades, Dr. Schechtman's Nobel win was the culminating of the vindication of his discovery. According to the Royal Swedish Academy of Sciences,his work "fundamentally altered how chemists conceive of solid matter."

Because it spans disciplines, an interdisciplinary community has grown around expanding and applying Schechtman's discovery. The unusual patterning of the quasicrystals was relevant to new developments in mathematics (tilings and random tilings), physics (transport, magnetism, and electronic structure), materials science (new methods in electron microscopy, discovery of new phases, and new understanding of friction on hard metallic surfaces), and chemistry (new heterogeneous catalysts). Although its real world applications have been limited so far, understanding of these materials' unique properties has been used to create a new type of hardened steel used in razor blades and surgical instruments.

As a scientist in Israel, Dr. Schechtman is in a hotbed of cutting-edge scientific research, as evidenced by the country's outsized success in winning Nobel Prizes. Work conducted at Dr. Schechtman's main institution, Technion, has been recognized with by the Swedish Academy 6 times in the last 10 years. Shechtman was tenth Israeli to be honored with the highest prize in science. Notable against the trend of recent Nobel Prizes in Chemistry that has named groups as winner, Schechtman was designated as the sole winner, underscoring the singular nature of his discovery.

Since winning the Nobel in 2011, Dr. Schechtman has been using his higher public profile to advocate for education reform and becoming President would raise his profile even higher.

Although the last 8 presidents have been career politicians, Schechtman’s candidacy for the presidency as a scientist is not without precedent in Israel. The country's first president, Chaim Weizmann, elected in 1949, was a scientist. He founded the Weizmann Institute and its research has contributed to the development of widely used technology and research methodologies. Another scientist, Dr. Ephraim Katzir was elected president in 1972 and he was in office for 4 years. Dr. Katzir emphasized science and education as instrumental to economic prosperity in Israel.

Elected by the 120-member Knesset, the President of Israel is a ceremonial figure whose position is apolitical by Israeli law. Any Israeli citizen who resides in the country is eligible to run. Despite its nonpartisan nature, Schechtman would have the power to appoint members of the Council on Higher Education, the National Academy of Science, the President of the Israel Academy of Sciences and Humanities, and the Wolf Foundation, whose stated mission is "to promote science and art for the benefit of mankind." His influence on the organizations would work toward realizing his vision for improving Israel's future.

As President, he plans to begin by making reforms to bolster education and technology. Since announcing his candidacy, he has met with the Speaker of the Israeli parliament, the Knesset, to discuss what public issues he would champion as president. Schechtman told the Speaker that he extols "creative, scientific, and entrepreneurial Israel in his lectures abroad and he would be a strong advocate for the advancement of science in Israel.

Schechtman said in his Nobel Lecture that scientists should "promote education, rational thinking, and tolerance," all admirable goals for the would-be president of Israel.
Email ThisBlogThis!Share to TwitterShare to FacebookShare to Pinterest
Newer Post Older Post Home