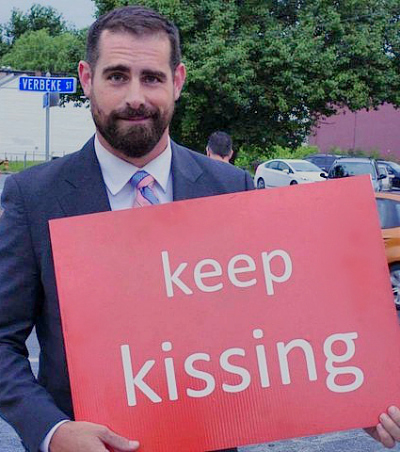 Image credit: courtesy Brian Sims
From his college football days to local and national politics, Brian Sims is ready to play the game...and he hits hard
by Sean Schmidt

In the United States, the list of badass Democrats is short. When Ann Richards delivered the keynote address at the 1988 Democratic National Convention I joked with a friend that she was the only Democrat with testicles. I said the same of Hillary Clinton soon after Bill Clinton's second term in the White House when she began her own political career. Hillary made some pretty bold statements out of the gate and even though I was impressed, she didn't have the white-leather-chaps, Harley-riding personality that Richards did so voters never embraced her the way they did Richards.

Other Democrats along the way have certainly been outspoken, some even a bit inspiring. But I didn't have that same "damn, she's a badass" reaction to a politician until I heard one of Pennsylvania House of Representative Brian Sims' speeches in 2013. He was passionate about the topic of which he was speaking, he was calling politicians and other leaders out for poor performance, and he gave a clear expectation for how he expected his colleagues to act. I knew nothing about him at that point but I was really impressed.

I followed Sims on Facebook after I saw the video of the speech and caught up on his life and political history on Wikipedia. Sims is the son of two Army officers and in 2000 became the first openly gay college football captain in the NCAA when he came out to his teammates. That certainly took some courage. In 2004 he earned his JD from Michigan State and went on to a position with the Philidelphia Bar Association where he worked on, among other areas of law, gender equality and environmental regulations.

I continued to be a Sims fan, mostly through Facebook, and hit the 'Like' button on many more videos and posts Sims made on issues ranging from women's rights and the environment to social justice and LGBT rights.

In April 2015 I had an opportunity to meet Sims during a visit to Seattle. I had reached out earlier in the year to Sims and mentioned that if he was ever in Seattle, I'd be happy to help arrange some meet and greets at the university where I worked, as well as in the community. Since the visit occurred during Earth Week, I was able to arrange several discussions with students and community organizations on the topic of celebrating and honoring people and place. Having no car myself at that time, I rented a Nissan Leaf for the day and proceeded to drive Mr. Sims and his PR colleague, Troup Coronado, around the Seattle area for the day. I mention all this backstory only because when you chauffeur folks around for a full day, you tend to get to know them fairly well within a pretty short period of time.

In addition to chatting about career paths and life stories, we also talked about what inspired us, what challenges we'd faced, and what the future might hold. One thing that stood out about Sims from these casual conversations was his incredible passion for human rights, in particular women's rights and LGBT rights. He works tirelessly on these issues, both in Pennsylvania and at a national level. When Sims met with law and business students, this passion rang loud and clear and it was evident that the students were truly inspired. In another meeting, several leaders from the Native American community participated. I'm still not sure who was more inspired, Sims or the other participants.

Sims might use words like 'outspoken' and 'driven' to describe himself, perhaps even 'fierce' and 'flamboyant' as well given his sense of humor, but 'humble' and 'modest' are also quite appropriate. Sims mentioned at several of the meet and greets that he continues to hear from young members of the LGBT community who face incredible challenges in their lives. Like all of us, Sims has faced many personal challenges in his own life so perhaps this is the reason he works hard to respond to any youth that reach out to him with their struggles. He knows he serves as a role model and he takes the role and responsibility very seriously.

Whether it's gender pay equity or the right of transgender individuals to serve in the military, you can be sure that Sims will take the advocacy challenge head on. In April of 2017, Sims took on an internet troll/bully that left a racist and homophobic comment on Sims' Facebook page. Sims called the phone number the individual listed on their Facebook page and ended up reaching the individual's grandmother. Sims' action received a great deal of attention and stands as a great example of how Sims' down to earth but direct approach earns him the title of badass Democrat.

If I STILL haven't convinced you that Sims is indeed a badass Democrat, I ask you: how many politicians - on either side of the aisle - have a Benjamin Franklin quote tattooed on their arm? I'm guessing few to none. And as someone who also has a tattoo in that that very sensitive upper-arm-meets-under-arm area, I can say that it I will think twice before getting another tattoo in that particular area. 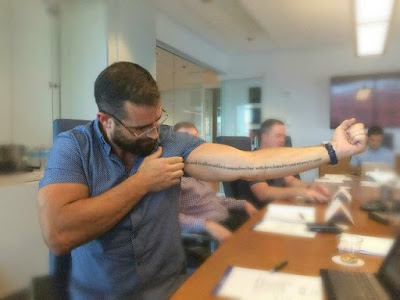 “Be civil to all; sociable to many; familiar with few; friend to one; enemy to none.”

So bravo Mr. Sims, keep up the good work! I know many, including myself, are looking forward to reading the headline "Mr. Sims goes to Washington" in the near future.