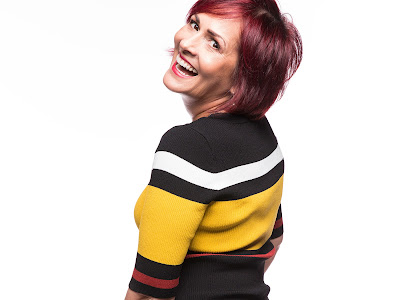 Shayla Rivera promo pic for HBO Latino's "Entre Nos".
Image credit: HBO Latino
Shayla Rivera is a Puerto Rican American aerospace engineer, comedian, and STEM advocate. Rivera also wears many other hats including keynote speaker, Professor of Practice at Texas A&M, and producer. Often described as a renaissance woman, she uses humor to share her own story, as well as to inspire others.

Rivera was born and grew up in Puerto Rico. Her interest in science and engineering started at an early age, along with a keen interest in human behavior. Rivera earned a BS in Aerospace Engineering at Texas A&M where she also took additional courses in psychology. After graduation, Rivera worked for McDonnell Douglas Space Systems as a rocket scientist, literally, in programs including the NASA Space Shuttle and International Space Station. She left NASA after five years to pursue her interest in psychology that eventually led her to corporate training, executive seminars, and motivational speaking. It was in this role that she also discovered her talent for comedy.

She worked with Debbie Allen to create the hit one woman show “Rocket Science and Salsa,” and was honored with a "Best Lead Actress" nomination by the NAACP Theater Awards. For the same production, Allen also received a nomination for "Best Choreography". She went on to participated in many other comedy events, shows, and series and was honored by Latin 2015 as the Finniest Latina Comedian.

Rivera received the Award for Excellence in Public Speaking by the Latino Speakers Bureau in 2010, LA's “Mario Moreno Cantinflas Award” in 2014, and the President’s Volunteer Service Award from the President’s Council on Service Participation in 2017.